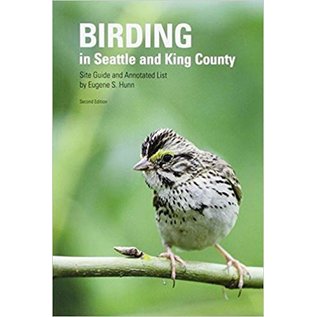 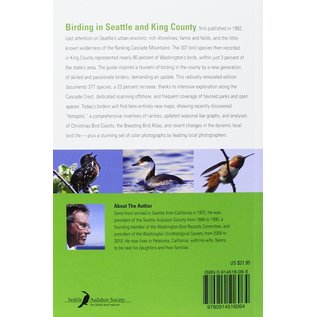 Eugene S. Hunn’s classic Birding in Seattle and King County — first published in 1982 — cast attention on Seattle’s urban environs, rich shorelines, farms and fields, and the little-known wilderness of the flanking Cascade Mountains, inspiring a tsunami of birding by a new generation of skilled and passionate birders. This radically renovated edition documents 377 species, a twenty-three percent increase from the original edition, thanks to intensive exploration along the Cascade crest, dedicated scanning offshore, and frequent coverage of favored parks and open spaces. Today’s birders will find entirely new maps showing time-tested birding sites as well as recently discovered “hotspots”; a comprehensive inventory of rarities; updated seasonal bar graphs; and analyses of Christmas Bird Counts, the Breeding Bird Atlas, and recent changes in the dynamic local bird life — along with a stunning set of color photographs by leading local photographers.

Hunn arrived in Seattle from California in 1972, joining the Anthropology faculty at the University of Washington, where he taught until retiring in 2010. His other books include Tzeltal Folk Zoology (1977), Nch’i-Wána “The Big River” (1990), and A Zapotec Natural History (2008). He was president of the Seattle Audubon Society from 1988 to 1990, a founding member of the Washington Bird Records Committee, and president of the Washington Ornithological Society from 2008 to 2010.

Add your review
0 stars based on 0 reviews